So, FINALLY a reasonable commute home last night, like the "good old days" before the winter break in February. Home IN THE APARTMENT at 5:45. THAT'S what I'm talking about!

That gave us plenty of time to explore a new park - Sunset Park - the PARK, not the neighborhood. I'd never quite found it before. But yesterday all the planets were lined up just so and EVERYONE found it, cuz it was PACKED! Kids and families and bikes and dogs and balloons and ice cream push-carts, it was great :-)

I was really looking for the off-leash dog run...and when we first entered the park, veering out of the path of enthusiastic scoot-ers and kids flying by on bicycles, I could just make out a dog running Way Over There...so we made our way across...stopping to get a couple shots of the NYC skyline (always a lovely thing no matter how many times you've seen it), but that's for another time. We got to said dog, a large border collie type, with his owner putting him through his paces of frisbee, come, down, stay, etc. In typical border collie style, he was all attention and intentness. I felt bad interrupting them, but as I saw no entrance to the grassy hill they were on (alone), I asked.

Turns out the young man is a dog walker/trainer in the city and he showed me the "secret entrance" to the nice private area...pretty much enclosed by fence between it and the rest of the park, but "open" to the street side, but for a 5' or so drop to the sidewalk below. A dog would have to *really* want to get out of the area to jump down, and Caleb is so not a run-away-er that I felt comfortable being in there. BUT it was a little precarious getting in - I had to climb up onto a low narrow ledge, that got higher as you went along...Caleb trailing along behind me...and sort of sidled along til I could get to the opening in the fence.

Finally we were in (and alive, to boot! yay!), and Caleb and Logan (the border collie) got to play while Teo, the young man, and I chatted dogs. We stayed til the sun was almost down...and then we climbed back out (a little scarier than climbing in, but I'll do it for Caleb!) and headed home.

Teo told me about a doggie play group there some mornings...we'll try to make it back up there some weekend soon...and a beach somewhere along the Belt Parkway where dogs are allowed off-leash and can swim. Caleb would love that!

In all, a Two Thumbs Up Day! 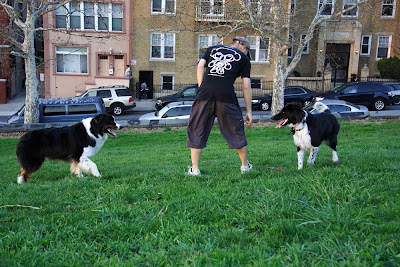 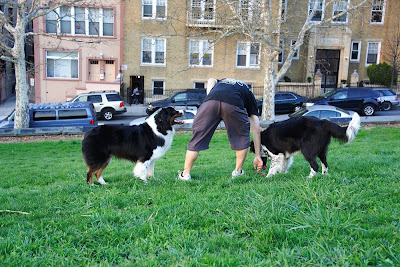 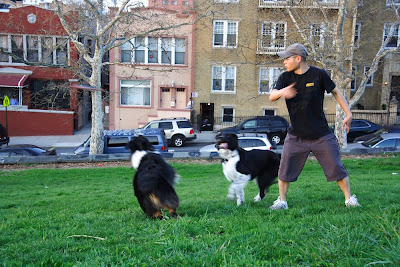 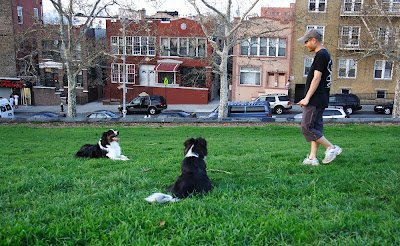 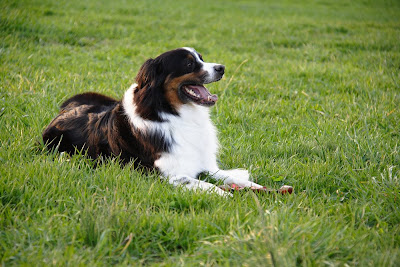 Posted by Fashion Schlub at 1:11 PM