what will the new year bring for you? 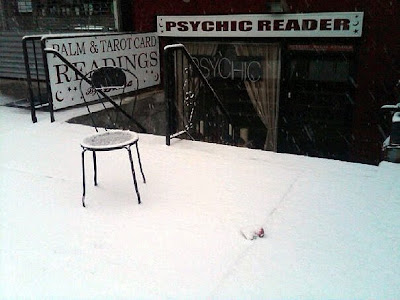 I fully-well intended to walk the dog to dog park this morning. for those that know me, making that 300-mile walk is A Big Deal for me. I am NOT a walker. But I have been without a car for 9, NINE, that's 2-days-more-than-a-week, 9 days. Nine. And the on-leash walks around a couple blocks just doesn't cut it for a 5½-year-old Australian Shepherd. He needs some OFF-leash time. Not just for the exercise factor, but for his mental health. So he can run, and go in the direction HE wants to go, and sniff what HE wants to sniff, pee on what HE wants to pee on. Dogs need a little freedom like that.
Well, anyway, I had no idea when we set foot out of the apartment this morning to make the long journey to dog park, that we would be walking, instead, into freaking WINTER WONDERLAND. The snow was coming down so hard it was literally choking me. Well, a couple flakes blew into my mouth as I walked (gasping for breath) and made me cough. But still.
Anyway. Given the weather, we didn't head for the park, but instead for a playground a couple blocks away...and fortunately the visibility was so poor that I figured we were safe with him off-lead, if we stayed walking around the outer perimeter, which is lower than the track and athletic field in the middle. He was able to get a couple good gallops in, and between that and the slight uphill walk back home, I think he's good.
In the meantime, I didn't take the real camera as it was too wet out, but I snapped a couple snowy shots with the cell phone, so excuse the poor quality.
What do you think the new year holds for you??? 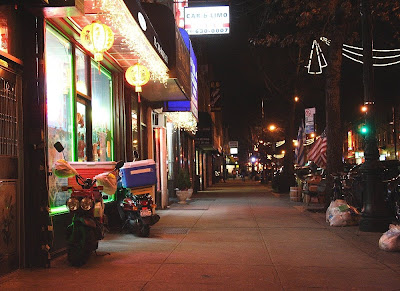 outside all the chinese take-out and pizza places, are little caravans of bicycles and mopeds, retrofitted with baskets or coolers to keep food hot en route to their deliveries. on long island, deliveries were made w cars and took forEVER. these guys deliver in all weather, on their respective "out in the weather" vehicles (can you call a bicycle a "vehicle"?), and they are FAST!
5th Ave, Bay Ridge
click on image for more detail
Posted by Fashion Schlub at 7:49 PM No comments:

a blaze of lights 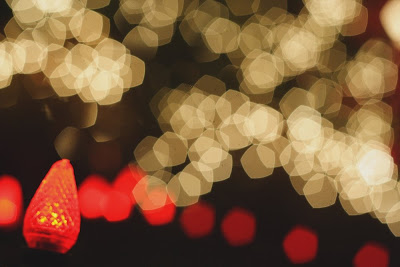 i think my favorite part of christmastime is the lights. lights make ordinary things seem special. two favorite sights are driving along the BQE at night and passing the downtown manhattan skyline...awesome....and landing at night at LAX, miles and miles of twinkling lights of los angeles spread out as far as the eye can see...amazing. christmas lights make *everywhere* seem special - rich and poor neighborhoods, plain and fancy houses.

so, just a last few christmas light hurrahs this week, before the lights are turned off for another year and the world goes dark.

read all about it! 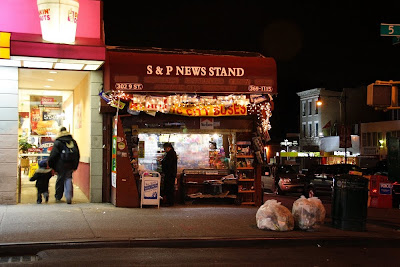 I think I was spoiled spending so much time growing up in Los Angeles - the newstands are amazing - like the best Borders/Barnes&Noble magazine section, all outside! Local and international magazines, every title imaginable.
I was a horse-crazy youngster then and was thrilled that I could browse The Quarter Horse Journal, The Chronicle of the Horse, The Arabian Horse Somethingorother, Practical Horseman, and many more, all in one spot! I'd never seen anything like that on Long Island. Now my magazine interests are fashion, photography, decorating, gardening, with an occasional dabble in crafts/DIY.
What's the best magazine source you've seen in Brooklyn?
9th St & 5th Ave, Park Slope
click on image to see more detail
Posted by Fashion Schlub at 6:33 PM 2 comments: 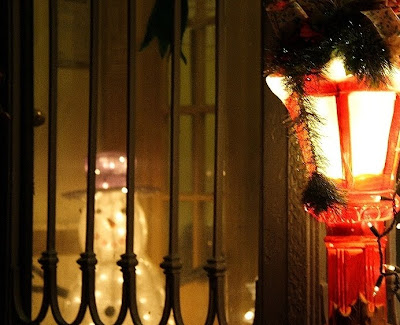 Christmas is over for another year...today was rainy, windy, and grey - my favorite kind of day for staying inside and working on indoor projects. I spent a couple hours re-organizing the bedroom and closet - when I first moved in here, I unpacked quickly and just stuck stuff anywhere to get the boxes out. And while I was productive, after 4 days without a car, I'm starting to feel a little trapped! I know people live in the city all their lives and never have a car, but they know how to do that! I'm clueless about the subways! One of my goals for this vacation week is to get on the subway and go into the city...just to get my feet wet. In the meantime, in the rain and small apartment, I'm feeling a little like a prisoner in my own home....not unlike this glittery guy behind bars...
Posted by Fashion Schlub at 10:02 PM 1 comment: 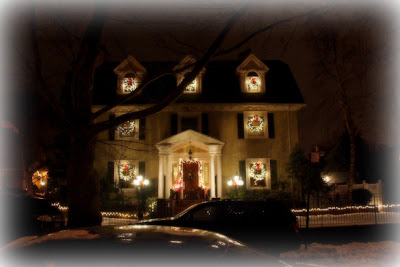 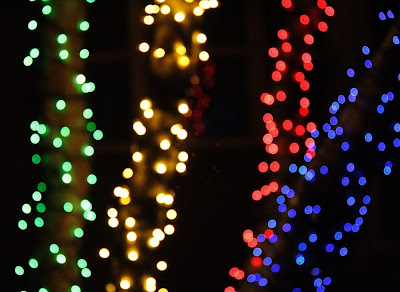 may all your holiday wishes come true... 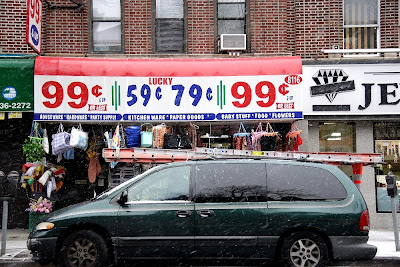 
i killed the transmission in my car today. well, *I* didn't kill it, it's more like it committed suicide. either way, tranny kaput. anyone want to donate $2200 to a good cause??
5th ave, bay ridge 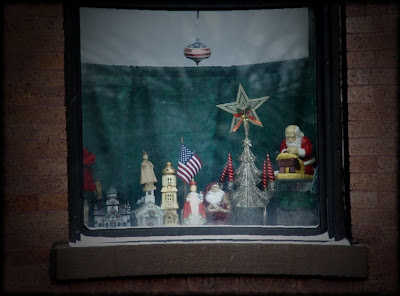 I first saw this windowscape back in the beginning of November...I sort of suspect it looks like this all year long. another window has a more summery display. i guess she figures she's got all bases covered between the two windows.
68th St, Bay Ridge

click on image for more detail
Posted by Fashion Schlub at 10:24 PM No comments:

we're not in mexico anymore, toto! 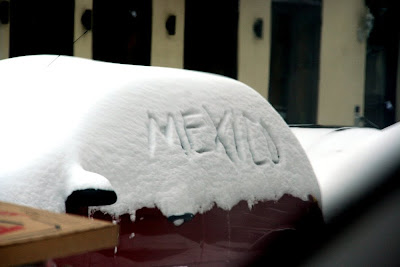 we had quite the lovely snowfall yesterday and last night...we went for a photo walk and drive earlier today and while there were many beautiful snow-covered vignettes, this just struck me as too funny....
off 3rd ave, bay ridge

Posted by Fashion Schlub at 6:47 PM No comments: 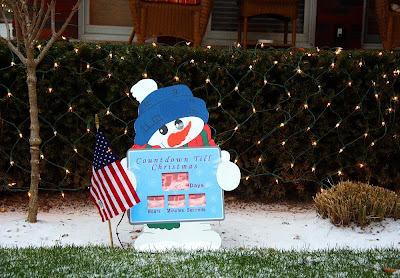 I can remember counting down like this when I was a kid...I wonder if there's anything ahead that I'll ever feel THAT expectant about again??
82nd St, Bay Ridge 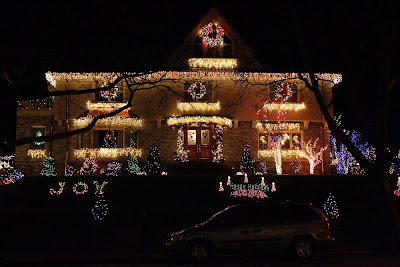 colonial rd, bay ridge
we're supposed to have a buncha snow over the weekend, i'm so excited i can hardly stand it!
Posted by Fashion Schlub at 10:11 PM No comments: 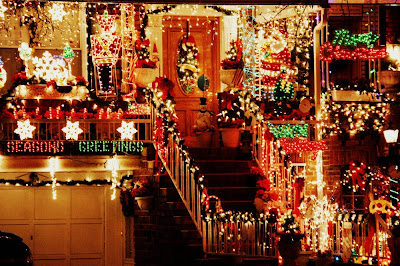 this house has about everything but the kitchen sink....fun! 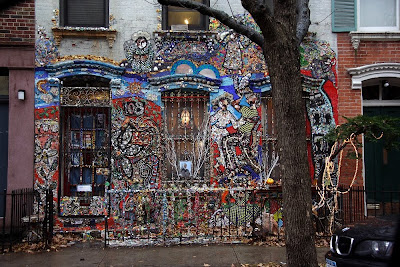 i think this is So Fabulous - these people are virtually covering their house with mosaic work...
wyckoff st, boerum hill
(click on photo for more detail) 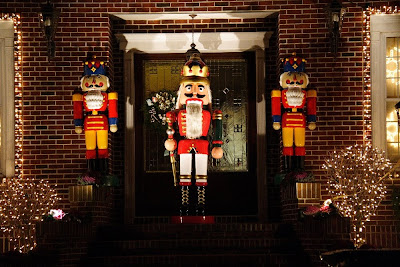 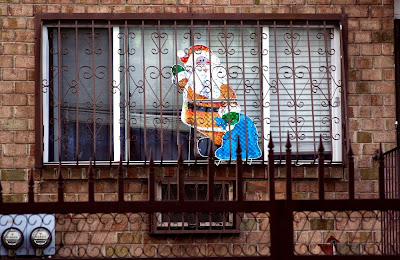 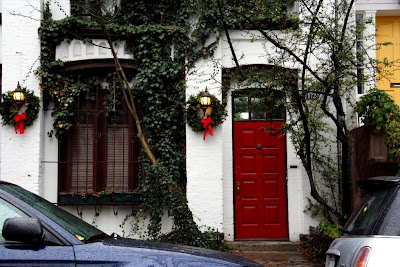 such a lovely and simple christmas scene. it reads so "CHRISTMAS!" yet all they really did was hang those two wreaths over the lanterns. the red door and ivy make it. 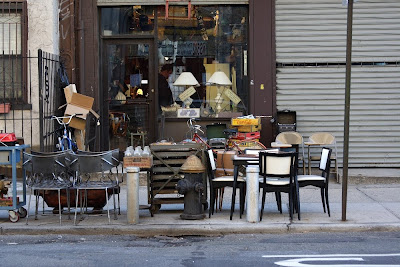 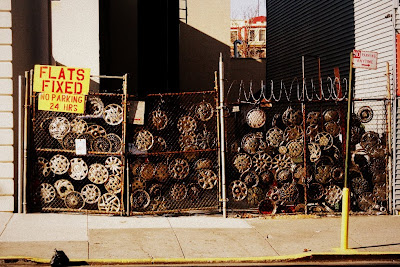 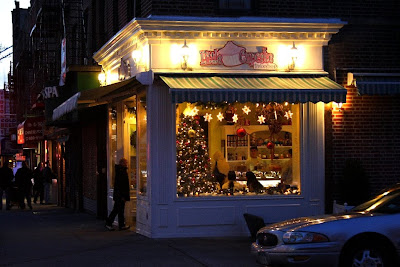 doesn't this look all cozy and nice and starry starry nightish?? 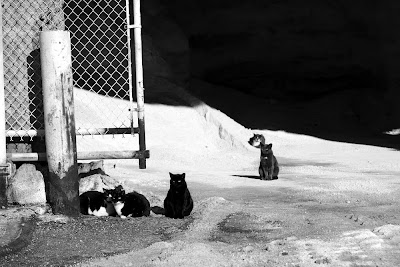 waterfront cats seen in a warehouse full of sand on a dead-end street in Sunset Park.

and speaking of cats, this is the perfect time of year to remember all those animals in need...and make a donation to the New York Humane Society http://www.humanesocietyny.org/donations.shtml
Posted by Fashion Schlub at 7:55 PM 2 comments: 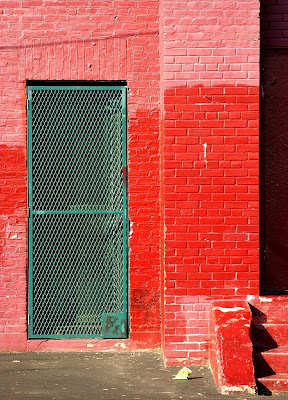 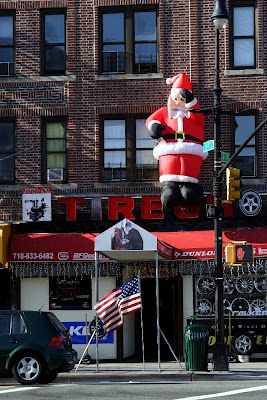 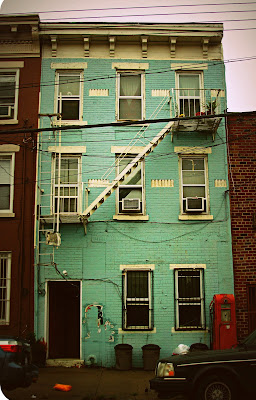 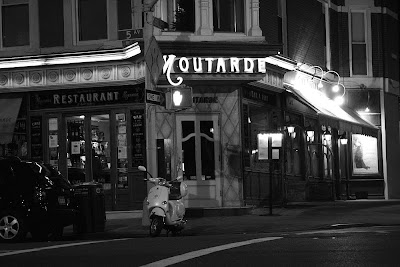 Just today, a friend and I were discussing what *exactly* constitutes a "bistro," after I'd mentioned how funny I thought it was that the concession stand at Ikea is called the Ikea "bistro."
According to Wikipedia, a bistro is a small, reasonably-priced restaurant in a modest setting. I found this a little funny - "Bistro patrons do not necessarily expect professional service or printed menus." Ha. According to the online reviews I've read, this bistro in Park Slope, Moutarde, may *not* have professional service! But it looked cute to me tonight, tres Francais, especially with that little scooter out front.
Posted by Fashion Schlub at 11:01 PM 2 comments: 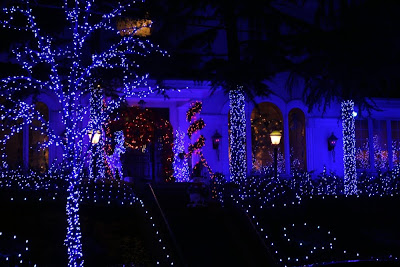 caleb and I went out for a wander this evening and ended up blocks and blocks away from home! trust me, I am *not* a walker, so for *me* to get so far from home without realizing it, you KNOW I am captivated by what I see!
mad lights. mad. this is bay ridge.
Posted by Fashion Schlub at 10:01 PM 3 comments:

some pretty big shoes to fill... 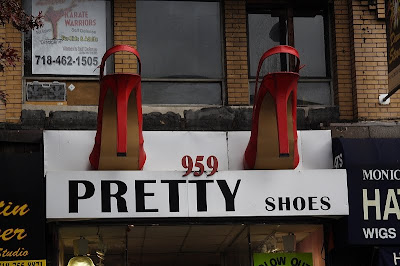 Santa Claus is Comin' To Town 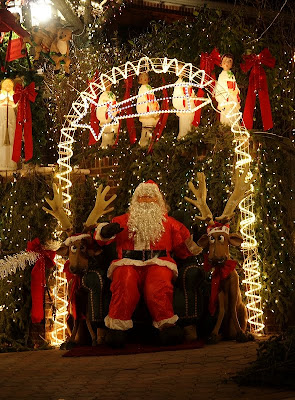 He's makin' a list, checking it twice, blah blah blah. The homes of Dyker Heights have some MAD Christmas lights!
Posted by Fashion Schlub at 8:45 PM No comments: 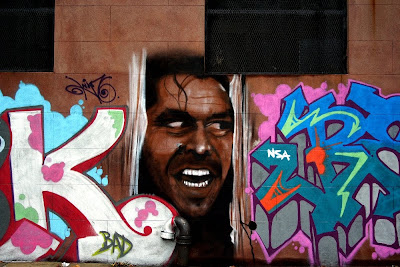 I've been to Ikea in Red Hook three times. I've gotten lost three times :-) Even yesterday with my new gps. Ha. But the good thing about being lost is you see stuff you would normally miss.
Posted by Fashion Schlub at 10:02 PM No comments:

Brooklyn Brooklyn Take Me In 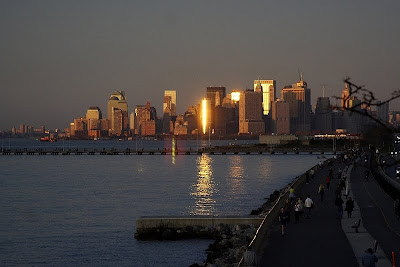 Well, The Big Move has been made. I wanted a change and I got a change! I've lived in the suburbs all my life...and in Islip, Long Island for half my life. But my daughter left for college this fall and it just seemed time for A Big Change. So I sold my home of 14 years and moved to an apartment in Bay Ridge, Brooklyn.
I still work on Long Island, so I don't have as much time to photo-opp-hunt as I used to, but I'm gonna make an effort.
Anyway, this song by The Avett Brothers was sort of my theme song all during the move...there were definitely some kinks...but I made it...and thought you'd like to hear the song that kept me inspired...Brooklyn Brooklyn Take Me In
And here's one of the things I love about Brooklyn - views of Manhattan...
Posted by Fashion Schlub at 6:44 PM 7 comments: